These motor algorithms, the execution of which involves the whole body, consist of many separate parts (subordinate algorithms). For example, the movement of the arms and legs must be coordinated with the movement of the torso. Only under the condition of close interaction of all parts of the body, the body can straighten and move.

Such a process necessarily requires regulation, because the body must remain in balance with every movement, even the smallest one. This process can be compared with weights. If we put material on one scale pan, the corresponding weights must be placed on the other pan of scales in order to restore the balance of masses on both pans of scales.

The human body is subject to the same addictions, but in a much more complex and complex form. In a state of equilibrium, the parts of the body are arranged so that they are balanced, and the centers of mass (center of gravity) are above the points of support. Thus, with every, even the smallest, change in the position of the body, the entire sensorimotor system of the body is included in the work in order to maintain balance. At the level of the spinal cord, the control of unconscious movements is carried out directly, so to speak, in the shortest way. The brain as “central authority” coordinates the execution of subordinate algorithms in such a way as to restore balance again and again.

Constant adjustment of the posture during extension and movement of the body requires the interaction of various muscles, as described earlier. The work of individual muscles is organized within the framework of the used motor algorithm, and is subject to the general goal of the movement.

A competent diagnostic and therapeutic conclusion is only possible when the movements are considered in relation to the position of the entire trunk.
The global algorithm is performed due to the coordinated interaction of all parts of the body. For example, the course of movement of a crawling child who wants to reach a red cup on a chair can be explained in general terms as follows. The child gets the idea that he wants to own this glass. Thus, the child develops a goal. To achieve his goal, the child mobilizes all his motor skills. The child must change the function of the hand and arm in the crawling motor algorithm in order to be able to grab the cup, which is above the level of his head.

In the process of performing this movement, his body should be in a straightened position, moreover, the weight of the body should move from four to three limbs. His spinal column leans slightly to the side, and turns to give the hand the space it needs to act. If the distance of the outstretched arm is not enough to grasp the object, the child, with the help of his hands and with emphasis on his legs, will pull his body up to the bedside table. In the meantime, he will use the brush with which he originally wanted to grasp the object to pull and support.

Once the body is securely supported on the legs and arm, he will reach out with his free arm and stretch out his hand towards the object, and grasp the desired object if he gets close enough to it.

The course of performing the movements described in this example becomes a meaningful and purposeful global algorithm when the arms, legs and spinal column work together in “coordination” with each other.

Access to the whole body helps the child gain foundational experiences. Only when he acts independently and thus becomes acquainted with his body and with what surrounds it, only then can he increase the treasury of his experience and improve his perception. To feel, the child must grasp. To understand, he must listen. To find words and speak, the child must put objects in his mouth, taste them and lick them with his tongue. If a child at the age of 8-9 months throws a toy away from himself again and again, in order to then take it and throw it away from him again, he performs a very important action: he learns to correctly assess the distance, develops an eye. The accumulation of experience becomes possible due to the use of various motor algorithms.

The child does not yet have any idea what it feels like to touch what surrounds him, what it tastes like, and what is hidden behind what he sees. He doesn’t know what his feet taste like or if he would hurt if he pricked himself.

He does not yet know how to walk, how to jump and climb. But in part, he has the ability to do so because he has innate abilities. It is during the first year of life that the processes of using innate abilities are especially intensive, as well as their addition or replacement with what the child learned.

By the use of motor skills, it can be understood that the child is curious about what surrounds him, that he discovers the world around him and wants to change it. Only then will the child be able to use this motor skills in all the variety that is at his disposal, while showing all his ingenuity. In this ingenuity, the child shows his mental potential. As a rule, mentally handicapped children noticeably lag behind in the development of their motor skills and are not capable of such a creative approach that normal or gifted children show.

Dependence of movement on posture

A pose for a child, and even an adult, is a supporting element that allows you to purposefully move in the earth’s gravitational field. Posture is the basis for movement. Without a posture, purposeful movement is impossible, since any movement, no matter how small, must overcome the force of gravity. This means that the musculature that maintains balance and ensures posture must constantly work to keep the body in balance. For example, when extending the arm to take the cup and bring it to the mouth, it is necessary to change the posture and balance the torso in order to be able to move the arm away from the body, and then calmly and purposefully guide it to the cup. In this case, not only the muscles that ensure the movement of the hand should be involved, but also the muscles that support and stabilize the hand during movement, i.e. postural muscles. Only then will the movement be calm and smooth, and the cup will safely reach the mouth. But in the absence of proper coordination of muscular work at any stage of the movement, the goal will not be achieved, for example, if too much distance is covered during the movement. The well-known neurologist R. Magnus said this very accurately and expressively: “Every movement begins with a pose and ends with a pose. Posture follows movement like a shadow. ”

For the example of the hand that moves towards the cup, first the torso assumes a certain position, it straightens up, overcoming the force of gravity, while taking such a position that creates the opportunity for the hand to move away from the torso. Then the musculature holds the hand in a certain position with overcoming the force of gravity, and the other musculature simultaneously forces the hand to move towards the cup. This movement is carried out from a certain posture: for example, sitting with support on the pelvis, legs and feet. 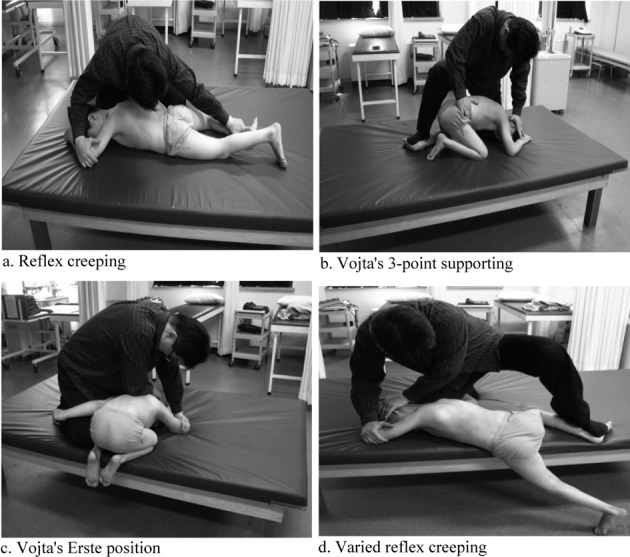 Observing the baby during the first 6 months of life, one can see that in the foreground he has to ensure the position (posture) of the body, and not movement. The infant shows this both in the supine position and in the prone position. For example, if at the age of 5 months he lies on his back, grabs a toy and puts it in his mouth, it is quite clear how the movement of his arms and legs depends on the regulation of the position of the body, and how the posture of the body takes the foreground.

But without a posture balanced over the entire supporting surface of the back, it is impossible to lift from the support for purposeful movement of the arm or leg.

It is not until later that the observer notices any movement in the positions of the rectification at the higher levels in his field of vision. In the case of crawling or walking, the movement of the arms and legs is primarily visible, moving the torso forward. It can be assumed that the posture in this case does not matter. In fact, it’s quite the opposite. In order to move the body in this way, a constant dynamic change in the posture of the torso, as well as limbs, is required. The higher the body is straightened, the smaller the area of ​​support becomes, and the harder it is to maintain balance. To prevent the body from rocking or tipping over, and to be able to purposefully move, the sensitivity of the posture control must be very high, much higher than when adjusting the posture of the body down, in the supine or prone position.

Overcoming the force of gravity is the main task that must always be solved. After all, every movement shifts the weight of the body, and you need to re-create balance. Movement requires support, because only the presence of a fulcrum makes it possible to move towards this point, or away from it. Therefore, the musculature is required to create a balanced and stable posture, but, nevertheless, allow movement. Such a situation can be observed in the helplessness of the newborn, who is not yet able to either adjust his posture accordingly, or provide reliable bone and muscle support. Subjected to gravity, his body lies on the bed, but he is not yet able to use the surface of the bed as a surface to lean on. Only with further development will he be able to use, for example, his back as a supporting surface.

If the child managed to walk without support, the entire weight of his body will be directed to a very small surface of the feet.